One of my favorite things about spring and summer is good weather to be outside walking and hiking with my dog Titan. Not that we don’t hike year round, but it’s easy to get out when it’s sunny and warm. But, there is definitely one part of being outside that I do not enjoy that spring brings along with it every year…..TICKS!!!

Recently Titan and I were outside just walking around the neighborhood; not even in the woods or high weeds. We came home and started our daily “tick check” after being outside and unbelievably found 6 ticks between the two of us! What was even more shocking was that Titan had 3 different species of ticks on him.

As a veterinarian, I commonly discuss ticks and tick borne illnesses in the exam room. But, I am writing this to just keep the threat of tick borne illnesses in the forefront of our minds because it can be truly devastating for not only our pets but for us as well.
The three tick species that Titan picked up in my Manassas neighborhood were the Lone Star tick; the Black Legged tick and the American Dog tick. I only had one tick on me and it was a Lone Star tick.

Virginia has three species of ticks and we encountered and brought home all 3 of them in one 45 minute walk around my neighborhood! My dog Titan is on monthly preventative ticks products and has a current Lyme vaccine but I had not taken any precautions for me on my short neighborhood walk. 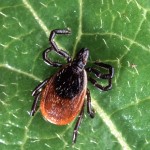 First, I will start with the Black Legged tick because it causes more disease in humans and dogs in the United States than any other tick. The Black-legged tick (also known more commonly as the deer tick) can carry a bacteria called Borrelia burgdorferi. This is the only tick in the Eastern United States that can carry the Lyme bacteria. The nymph and adult ticks can transmit this disease to dogs and humans and need to feed for about 36 hours to transmit the disease. Most dogs who are infected with Lyme disease do not develop clinical signs but are infected subclinically without outward signs of the disease. Those dogs who do develop clinical signs will likely have lameness; lethargy and sometimes a fever and sometimes these signs can occur long after the tick bite. Less commonly, some dogs will develop life threatening kidney disease. The Black Legged tick can also transmit the bacteria Anaplasma phagocytophilum causing many clinical signs and a parasite called Babesiosis that infects red blood cells; both in humans and dogs. 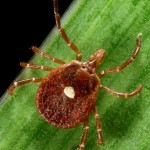 The second tick I removed from both Titan and myself and is quickly becoming a problem around the United States for dogs and humans. This is the Lone Star tick. The Lone Star tick should strike fear into any human but especially any red meat loving human-because it can cause a severe red meat allergy in some people (and this Iowa born and raised girl buys her beef by the cow). That being said let’s look at the most common diseases carried by these originally Southwestern United States ticks (they now are one of Virginia’s most common ticks). The Lone Star tick can transmit several bacterial species of Ehrlichia causing Ehrlichiosis in humans and dogs. Tick transmission of Ehrlichiosis takes about 24 hours of feeding for the tick. Ehrlichiosis can cause a variety of symptoms in humans and dogs ranging from very mild fever and lethargy to even death in severe cases. The Lone Star tick can transmit other diseases such as Tularemia and Babesiosis but neither of these are common in Virginia. 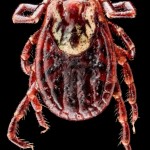 The third tick I removed from just Titan was the American Dog Tick. This tick can cause Rocky Mounted Spotted Fever (RMSF) in dogs and humans. RMSF is caused by an infection with the bacteria Rickettsia rickettsii. The initial symptoms can be very general just like Ehrlichiosis or Anaplasmosis, but if left untreated up to 25% of these cases can be fatal. It is thought that the American dog tick only needs to feed about 10-20 hours to transmit the bacteria; but studies are showing that very few of the American Dog Ticks carry the bacteria that causes RMSF. That being said, tick prevention is vital because this disease can be deadly to us and our beloved dogs.

So who needs tick prevention???? All of us. Any dog who goes outside needs tick prevention and possibly lyme vaccination. There currently is not a lyme vaccine for humans, but as soon as a safe vaccine is developed I plan on getting it. Our dogs should be tested at least annually to evaluate their tick exposure and potentially to treat them if they are infected. Currently I am treating Titan with a monthly flea/tick preventative called NexGard which is a chewable treat that he loves. But, there are a lot of other options out there from topicals to a new collar called Seresto that are very safe. For us humans, I think wearing proper clothing, checking for ticks and using products containing DEET if you are hiking. You can do your tick check and shower off that DEET once you get home. 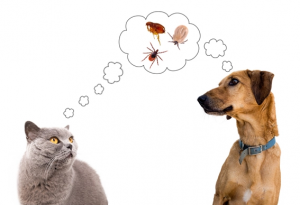 A couple of last notes. I didn’t talk about cats today but here is a small bit of information about them. Outdoor cats in Virginia can be affected by tick diseases; usually Cytauxzoon felis; causing a disease known as Bobcat fever. The American Dog Tick and Lone Star Tick can carry this parasite. Unfortunately, this disease kills 25-40% of infected cats. This is a devastating disease that I have yet to diagnose but will likely see in the near future.

If you are not using regular tick preventatives in your dogs or indoor/outdoor kitties (remember even song birds and squirrels can harbor ticks-they are truly everywhere) then talk to one of our veterinary team. We have great, safe preventatives and we will be very happy to work with your family to determine which would be best for your furry baby.